How to Choose High-Quality CBD | Between Two Herbs

Being a scientist, I always have questions about where CBD products come from, how they’re made, how pure they are, all of these types of things. Because federal oversight is so low, anyone can jump into the CBD market and make products, and that can be extremely sketchy! I’ve said it before, but I don’t think I’d buy breakfast cereal from my next-door neighbor making it in his bathtub… so what would the criteria be if I wasn’t producing my own CBD? If I wanted to purchase another product, what would I look for first?

Whoever I’m purchasing CBD from should know what farm was growing the CBD. They should also have water analysis, soil analysis, know what strain it is, and they should basically have a profile of everything associated with the plant. After that I would want to know who extracted it, as well as their method of extraction: are they using CO2? Are they using ethanol? Are they collecting terpenes? Do they winterize? I would want to make sure that all of the things that they are doing could be accounted for because if somebody who’s selling CBD doesn’t know how the producers are producing, that’s a problem.

After that, I would want a certificate of analysis (COA) from a laboratory. The laboratory needs to be ISO certified and needs to follow GLP (good laboratory practices). The reason for that is because it’s not that hard for a shady company to buy a high-performance liquid chromatography machine and get somebody who could theoretically run it after being trained by the company. That doesn’t mean that’s necessarily good science, doesn’t mean it’s being done right, and doesn’t mean it’s being done to the proper standards. So really, I would want products that are analyzed by people who spend their whole lives being trained, people who know not only how to analyze cannabinoids, but also know how to analyze anything under the sun, using the instruments of the trade. A company that is ISO certified and follows GLP is not going to be willing to risk its licensure to manipulate data, whereas a company that just starts a lab is more likely to manipulate its tests to show the kind of results they want. That seems to be one of the ways that some laboratories get more and more business. Not all laboratories are created equal, just like not all CBD is created equal.

Once I’ve established that the COA is coming from a reputable laboratory, I would want to dig into the COA to make sure they included several important items. The COA should include pesticide analysis, solvent residual analysis, and mycotoxins. It should have an analysis of the potency, hopefully, a terpene analysis, and a heavy metals analysis. A COA should have all of the things that you would want to know to make sure that the product is safe!

After all of that, I would look specifically at the label. Is it claiming to be hemp seed oil? If so, the company is not telling you the truth. There are no cannabinoids found in hemp seed oil; hemp seed oil is a light oil, and cannabis oils are medium-chain triglycerides. If a company is selling a hemp seed oil product and marketing it as a CBD product, that means the company is willing to withhold the truth in order to sell more products. Even if perhaps a product has passed all tests and is deemed to be safe, it doesn’t sit well with me that a company would openly say something that is known to not be true just so they could get more product out there.

Also important when reviewing the label: what are they claiming? What are they saying the product does? If anyone peddling CBD products claims that their product will absolutely fix an ailment or condition, without an actual scientific study that’s been conducted, that’s a huge concern. We have anecdotal evidence and a degree of knowledge that allows us to make assumptions about how we know cannabinoids will work, but that’s different from me saying “this will cure your diabetes,” or “this marijuana is going to fix your cancer!” That’s a whole different level of a claim that the industry as a whole cannot make, as there must be substance and data to back up any claims made.

Finally, I’d probably look at the nutritional information, like what oils they are using and how many calories the product contains. For flavoring, are they using natural flavors such as terpenes, are they using botanical terpenes, or are they just using literally the natural flavor of extracted oil? I don’t know whether any one of those things is wrong or not wrong, and often this can be a personal choice, but I would like to know what a product truly is before I ingest it. I encourage anyone reading this to do the same.

Zion Medicinal CEO Blake Smith is giving you an insider’s perspective about Medical Cannabis in this limited feature series, “Between Two Herbs.” Keep an eye out for Blake’s next piece. 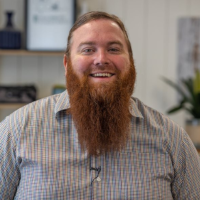